Autumn in the kitchen garden 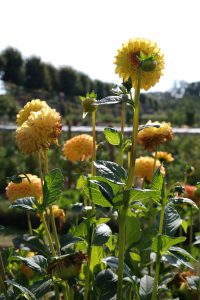 The start of August is like a second spring in the vegetable garden. It is sown and planted that it is a delight - in the coming winter months we also ensure our daily portion of fresh vegetables. 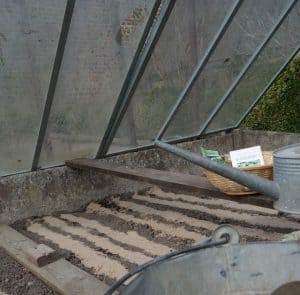 In the kitchen garden, the plots of onion, shallots and early potatoes are harvested to make room for rows of lamb's lettuce in mid-August (de Cambrai). sandalades, black radish and spinach (Winter giants) - and for the last time princess's bean. Savoy and Brussels sprouts have already been planted before the end of July.

The second half of the month is the last winter leek. The outside tomatoes are topped and stripped of their leaves. The rows of strawberry that are retained are thinned and mown with the machine. The oldest rows are being grubbed - and we are collecting the young trailers to build a new row of strawberries. 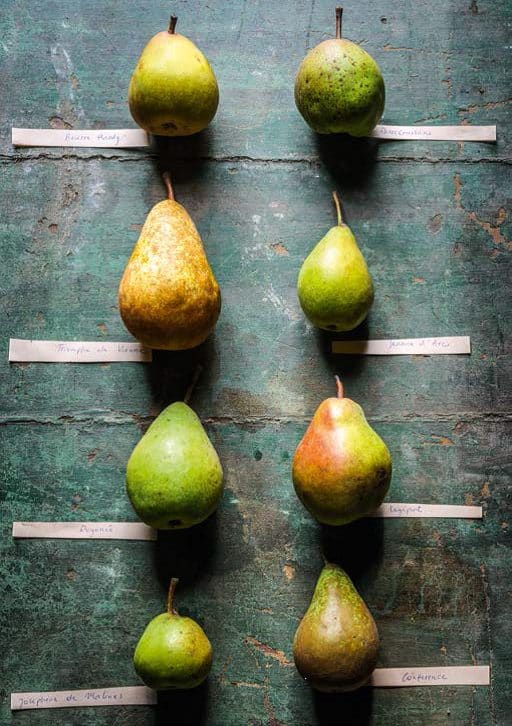 SEPTEMBER
September begins with the harvest of pears and apples in the standard orchards. While in the vegetable garden white cabbage isFilderkraut) harvested for the preparation of sauerkraut, tomatoes di Napoli for the passata, basil for pesto, and autumn raspberries, figs and apricots for jam or jar.

The leafy vegetables for autumn - the lettuce, sugar bread, endive and chicory - are ready to be transplanted in the flat containers. They are depleted in the box or in open ground - but need some shelter at night frost.

Keep in mind that mid-October growth is almost completely silent - the number of hours of light goes under ten hours a day - and it is not until March of next year that the growth process in the plants resumes. What you want to harvest in the winter or in the early spring will therefore ideally start the month of October. 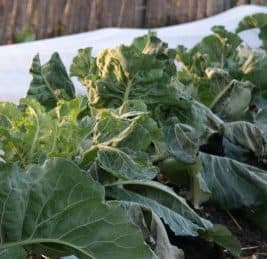 This applies in particular to the overwintering cauliflower cabbages and savoy cabbage. Especially recommended is the still unprecedented winter broccoli ( brocolli à jettes ) - provided that it provides some protection that already steals an abundance of small tasty buds in March.

Tip for beginners: make no mistake in choosing the Savoy cabbage. The blond or light green varieties are for summer growing and freeze at the first cold. Choose a closed crop with a bluish-green color - which indicates winter resistance.

In mid-September, a third of the chicory is already being gutted and shredded in one of the flat trays for a first harvest in December. It is useful to grub the chicory in parts. Spread harvesting gives a staggered harvest.

MOLSLA
Also the molsla, which is closest to the wild dandelion of all, can be treated in this way - but cut directly into the box in June, cut off in September and then obscure the tray with plates, provides the best harvest for the coming months. 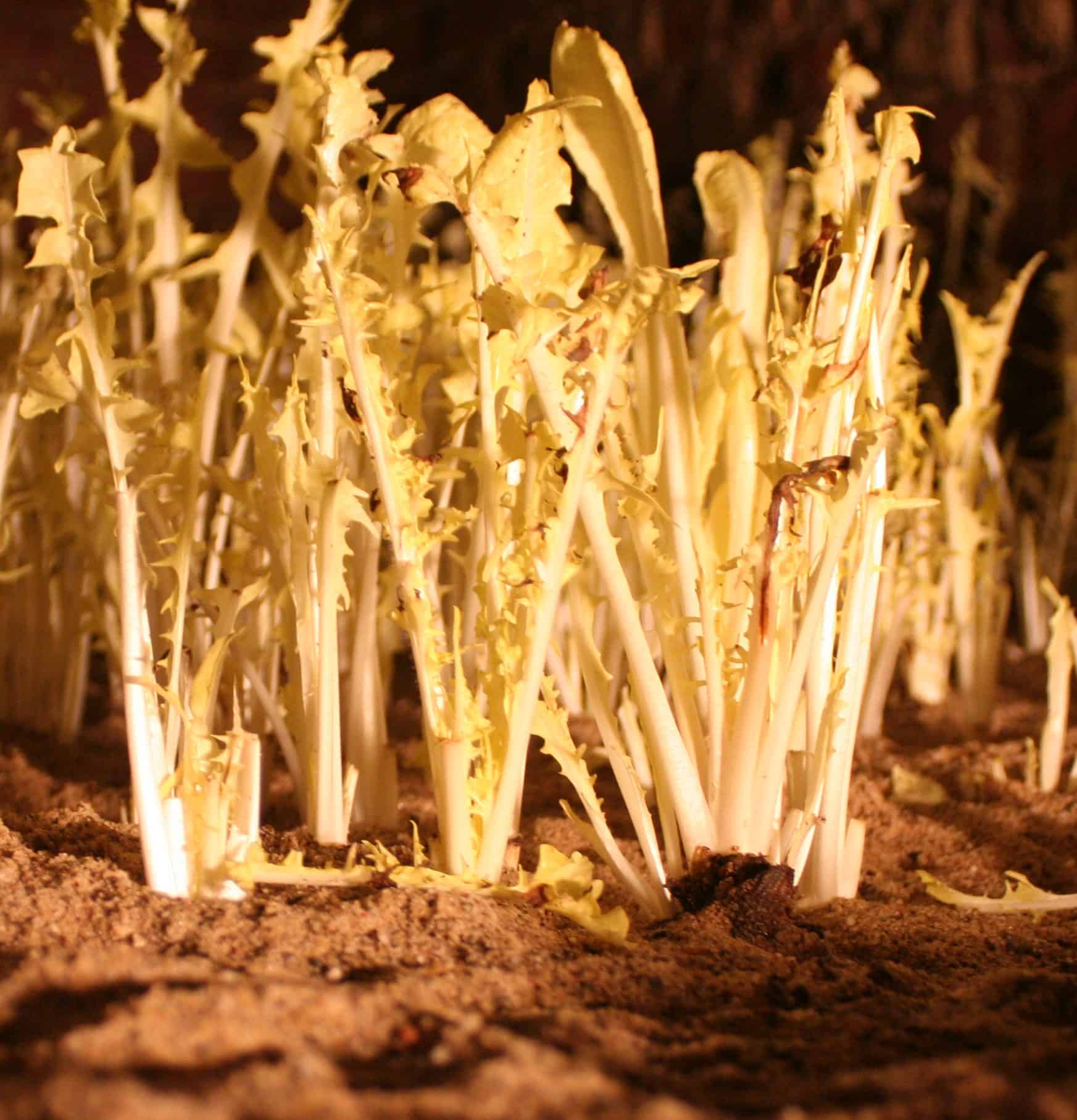 At the end of the month, the celeriac is tied and grounded and, depending on the variety, endive is bleached under pots. Cardoon, champion among the pale vegetables, let's continue to grow for a good month in full soil and will be brought back in October.

WITLOOF
The first chicory is harvested from September. With a fork fork the roots are removed and laid on long rows. Then the foliage is cut off, one to two centimeters above the root. It is important that the growth point remains intact. For the convenience of working, chicory roots are also cropped at the bottom until they are approximately all of the same length. Affected parts are also cut away.

The ensiling of the roots requires some preparation. At home you can choose to put the roots in a bucket or in a container with sharp sand in a dark cellar, but given the amount we work in Hex, we lay our roots in the flat trays of the nursery. To this end, the existing soil is first scooped out of the trays to a depth of about forty centimeters. Against the edge of this pit, the roots are neatly arranged side by side. A shovel of sand is thrown against each row before a next row is started.

Indeparated chicory is sensitive to mucous rot. That is why we poured the whole a little afterwards with a solution of horsetail extract (Equisetum) and we sprinkle seaweed lime over the cut off crowns of the chicory, after which the whole pile disappears under a layer of more than ten centimeters of dry loose soil. If your work has to be interrupted by rain, it is advisable to keep the soil that you have scooped out of the pit (and that you will use as a primer) dry by covering it with a sail.

Chicory can freeze, so we lay a large layer of loose straw on top of the casing soil. The entire circumference of the pit is also covered with bones of straw and corrugated sheets are placed over this entire structure to keep everything dry.

It takes an average of thirteen weeks before the first chicory can be harvested. One batch can often be harvested for several months, but it is advisable to work in at least two different parties at an early stage and, if it succeeds, to harvest Easter chicory until next year. 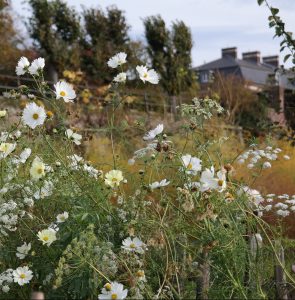 OCTOBER
With the month of October, the winter lurks around the corner. October is all about the harvest. Before the feast of All Saints Day (1 November), we want to have all our vegetables stored safely in the cellars.

Firstly, we pick all the tomatoes - including the green ones - and have them cut into flat boxes. They do not need sun or light for this - only the heat is enough to let the last fruits turn red.

The pumpkins are not harvested until the stalks of the fruits show signs of ripening: the stems color, shrink and 'spill'. But do not run the risk of an unforeseen night frost going over your pumpkins, because once the peel is frozen they can no longer be stored.

As long as the weather allows us, we continue at a steady pace to bring in the harvest: potato, carrot, parsnip, beet, turnip, black radish, salsify, parsley root, kneader's skin, celeriac and head cabbage are moved to the vegetable cellar without delay. containers with sharp sand are ensiled, planted or hung.

The leeks remain in the garden, but in order to be able to harvest them in times of constant frost, the earth is covered with a layer of autumn leaves between the rows.

The stake beans are already being pulled out of the ground 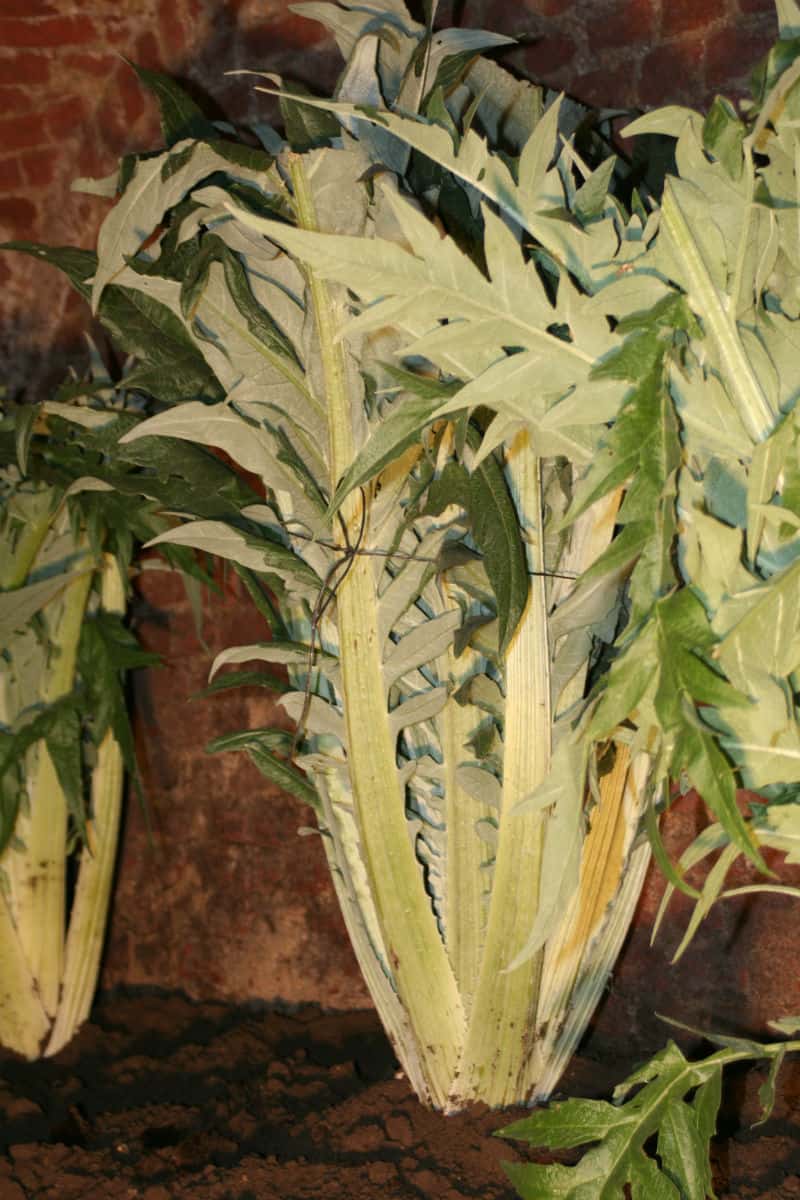 to dry faster and the shrubs of the small dry bean 'flageollet' are tied together with a string and hung in the company of onions and shallots under the eaves of the shed to dry.

As the weather evolves, the flat containers will be covered with glass halfway through or at the end of October - and at a later stage with reed mats to ward off the cold. In this way we are assured of fresh green and small fresh delicacies for a whole winter.

CARDOON
Finally, the large plants of cardoon are prepared for transport to the cellar. The lower leaves removed and the remainder tied together in a sturdy bundle, the plant is digged with root and all to be planted in the farthest cellar in all darkness. The first cardoon - the blanched leaf stalks are eaten - is harvested by Christmas. 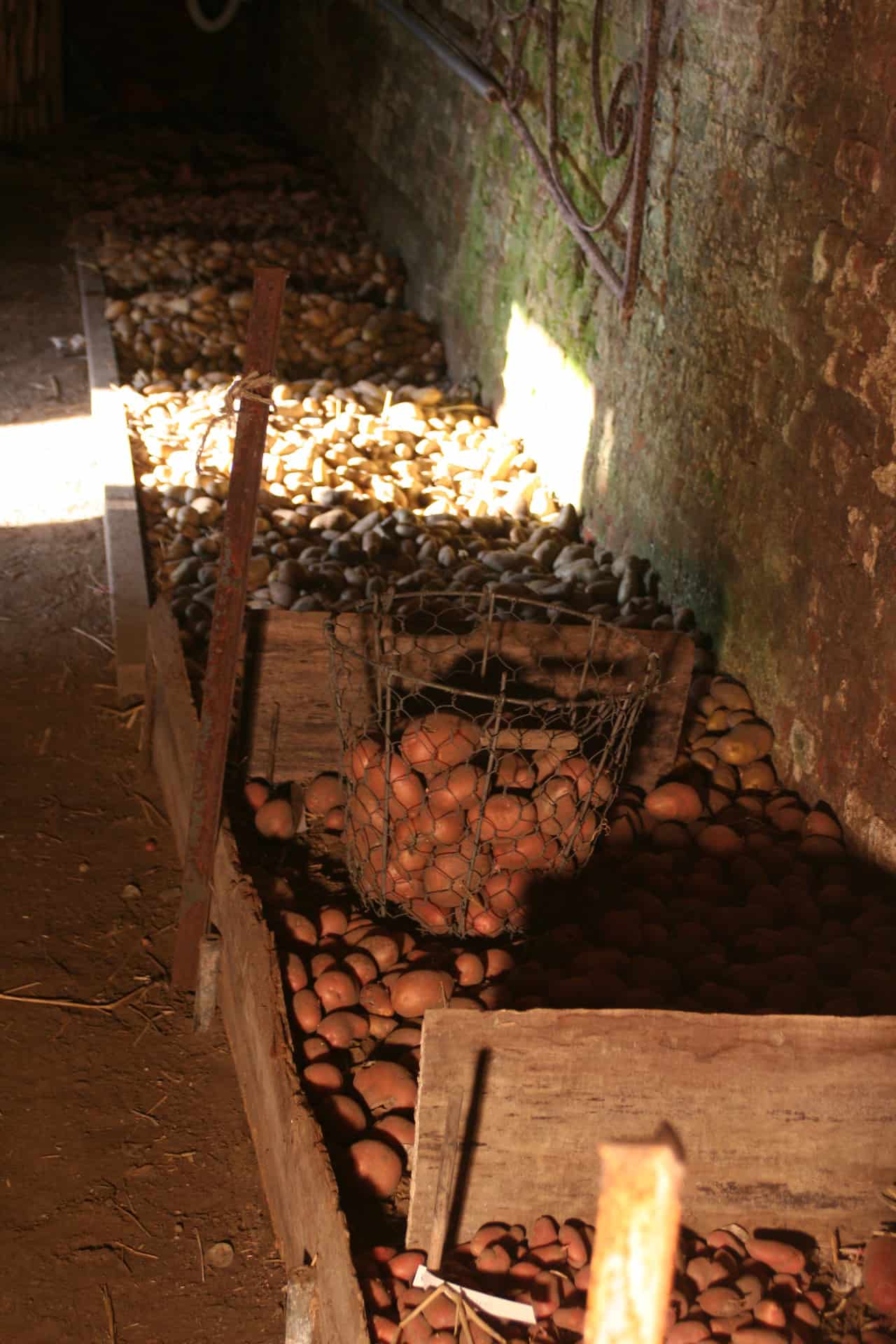 GREEN SEAT
In ancient times, every castle and every abbey had a vegetable cellar. It is, as it were, the 'frigo'from pre-industrial times and we have seen a growing interest in the concept in recent years - and also modern applications.

The vaulted vegetable cellar from Hex is probably the last of its kind that is still in use. In the autumn, the harvest traditionally moves from the vegetable garden to the cellar for storage. Some vegetables are buried with root ball while others are stacked in sharp sand or suspended from the vaults.
While outside, the vegetables remain fresh in the storage room and available to the kitchen until late spring.

The ideal conditions for a storage basement are: free from light and free of frost; a stable environment without major temperature fluctuations (from one meter below the ground it is the whole year between 10 and 14 degrees) and a fairly high degree of humidity - yet with the possibility of airing well from time to time.
A vegetable storage cellar prefers no concrete, but an earthen floor - just like a good wine cellar. 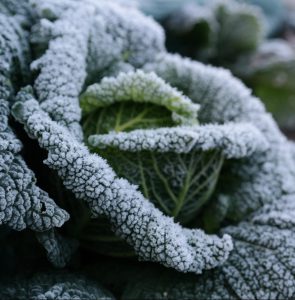 NOVEMBER
In the month of November we start preparing the vegetable garden for winter. As the plots become vacant, they are covered with the layer of autumn leaves collected on the paths and lawns. Covering the bare earth protects the soil life against the cold and prevents the earth from being slammed by the rain. It supplies enough worms to the worms and makes sure that you can get back to work in the spring when you release the beds without getting weed.

Support sticks, poles and bean stakes are collected and stored; and while we dismantle the vegetable garden, we note again on a plan which crops were on each plot.

DECEMBER
After this, the vegetable garden goes for the most part at rest until March of the following year. We only enter the remaining winter parcels where we still harvest lamb's lettuce, spinach, leeks and the remaining endive every week.

Savoy and sprouts start harvesting only from the first time it has been frozen. From the temperature below the freezing point, the starch in the coal is converted into sugars - which makes them remarkably tastier. Root and tuber vegetables are removed from the storage cellar and fresh lettuce herbs, molsla and chicory are found in the flat containers all winter. 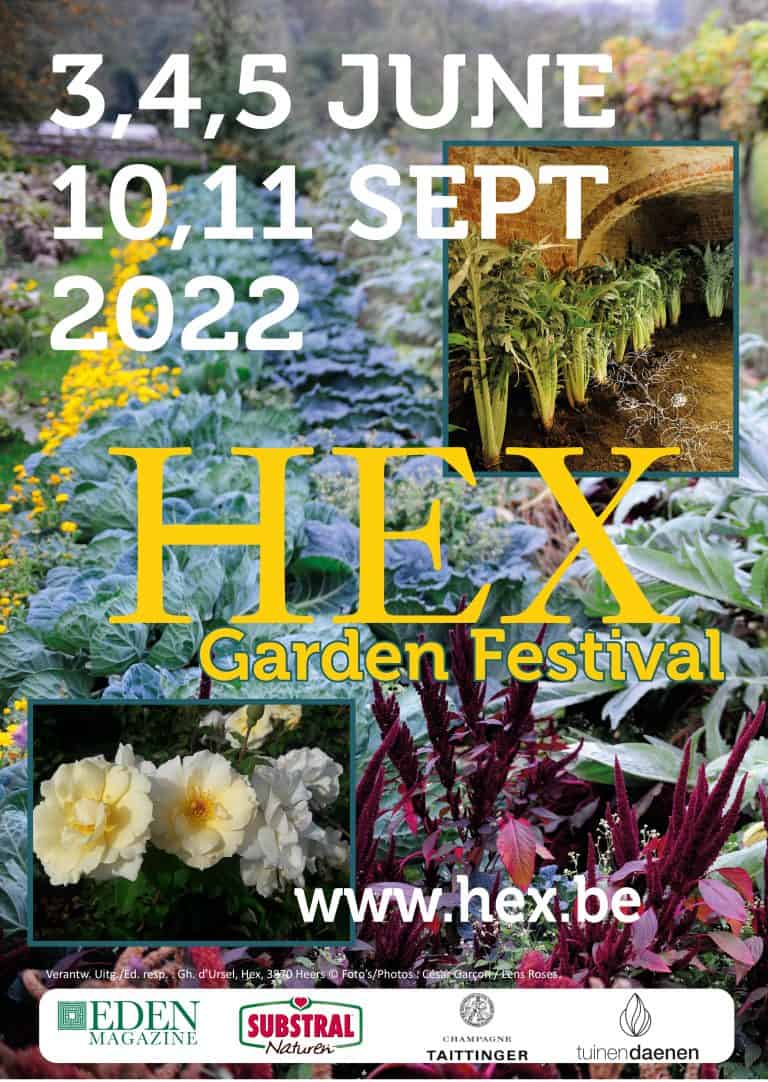 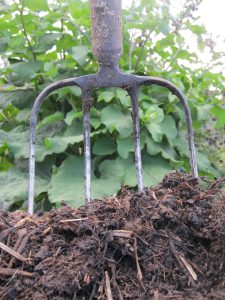 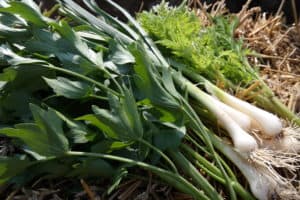 It's spring in the kitchen garden 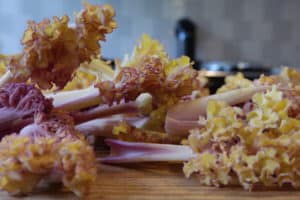 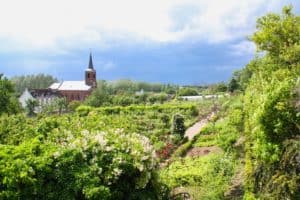 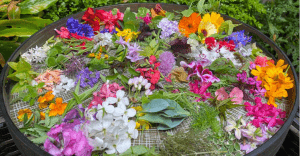 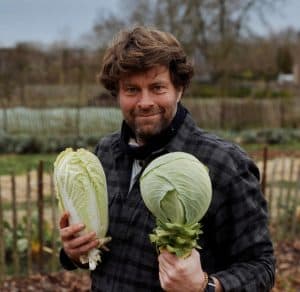 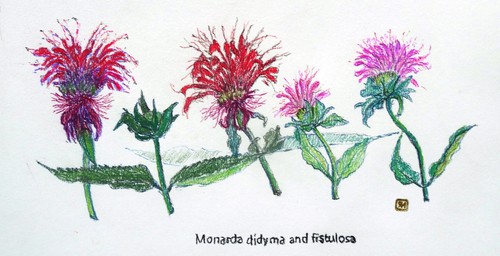 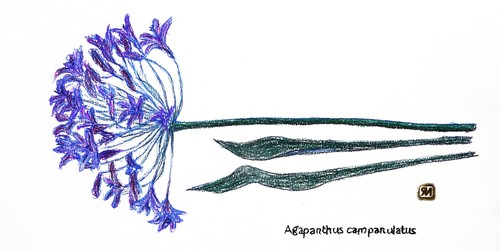 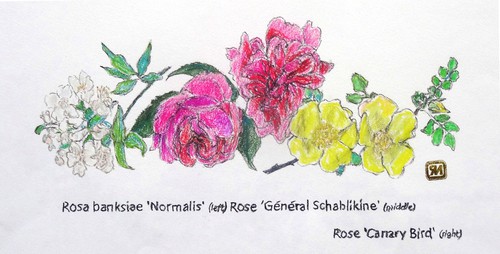 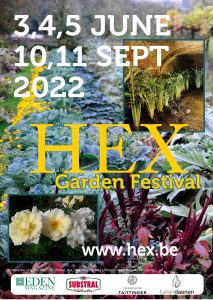